In all F-Zero games, Boosting is a driving technique that will give the racer a short burst of speed. The general idea of this action is the same through the games, however, there are some differences in each game.

How to perform a Boost is simple, but the strategy involved on where and when using a Boost adds depth to this gameplay mechanic, as employing this technique also has it's limits. The most famous of those limits is that no Boost can be made in the first lap, this is explained in game manuals as a safety measure due to marginal distances between machines. Gameplay wise, this also helps to have a practice lap to learn the course for a player without having to run through Practice mode.

The Blue Falcon Boosting in F-Zero

In F-Zero, Boosts increase speed around 100 km/h for a few seconds. They also enable the craft to cross over dirt paths without having dramatic speed loss. However, while doing so, there's still a speed drop that makes the vehicle go around normal speed. Boosts are activated by pressing the A button, and the player gets one Boost by each lap he or she completes, displayed by a green filling in the "S" symbols on the lower-right section of the screen and the "S Ok" words appearing in the center of the screen. They may have up to three Boosts in reserve.

While a boost is activated, one of the "S" symbols turn orange before disappearing.

It's possible to Boost by driving over a flashing yellow/pink arrow. This will accelerate the craft, making it reach around 900 km/h for a while.

F-Zero X implemented the most popular form of Boosting. Starting from the second lap, the narrator will say "You got boost power" while the screen shows "Boost Ok". Also, the life gauge changes its color from red to green; player may Boost as much as they desire, however, this gradually consumes a portion of energy, so using the pits is essential to boost more than just a few times. Racers can Boost by pressing the B button for increasing the speed around 100 km/h for each boost, while consuming some health. The effect of increasing the speed is cumulative, so boosting at 700 km/h will leave players (for example) at 800 km/h, and then boosting again will leave them at 900 km/h. Boosting itself until the limit won't destroy a machine, but the slightest touch to any obstacle (such as the guard rails, landmines, or other vehicles) will destroy the vehicle.

Vehicles have a Boost stat which is displayed when choosing a vehicle. The higher it is, the higher the speed increases.

By driving over a yellow arrow in the course, the player will boost, but with no health consumption. This is the only method of boosting prior the second lap. Boosting changes the thrusters color to green, while doing it by driving over said arrows, will change it to yellow while the boosting effect lasts.

F-Zero: Maximum Velocity returned to the original F-Zero boosting mechanic, with little to no change aside from losing more speed on dirt patches. To activate a boost, the player must complete a lap. After that, the boost is activated by pressing Up in the Control Pad. As with F-Zero, the player may accumulate up to three Boosts reserved, with the same "S" symbols existing in F-Zero.

In this game, the detailed specs of boosting are shown; they display how high is the maximum speed reach while boosting, and how long it lasts. If the boost is activated above the maximum speed, by being assisted by Dash Zones or mine explosions, the rate of which the machine decreases speed is slower.

F-Zero GX has a boosting mechanic similar to that of F-Zero X. They are activated from the second lap onwards, this is alerted by the narrator yelling "You got boost power!", while "Boost Ok" flashes in the center of the screen. Some Story Mode missions have the boosters enabled from the start. The life bar also changes from red to a rainbow design. Boosting is activated by pressing the Y button (by default), consuming some health in the process. However, boosting here increases the speed around 200 km/h, and it's more instantaneous when compared to F-Zero X. The speed increase is also cumulative, so continuous boosting will increase the speed even further.

The player may also boost by driving over yellow arrows with a lightning-shaped hologram, without consuming health. Boosting will change the thrusters coloration, but this depends on each individual thruster, as they have a predetermined set of colors that may vary even between the same machine thrusters (an example of this is the Black Bull's and Twin Noritta's propulsors)

The boosting in F-Zero: GP Legend is a combination of the mechanics of those in X and GX with F-Zero and Maximum Velocity. Here, being able to boost is announced with the "You have the booster" voice, and the health bar changing color from red to a gradation between green and red (those notices will repeat if the player recovers health after being low on energy)

Boosting is performed by pressing L+R buttons at the same time (by default) after the second lap, and having enough health. The boosting process is instantaneous. When activated, the speed will increase in a burst, and a portion of life energy will be taken directly. Boosting will increase the speed for around 300 km/h, and will last for a moment. The player may hold L+R when boosting is about to end to start another immediately, however, the boosting effects are not cumulative, so if racers can boost from 900 km/h to 1200 km/h, boosting again will only maintain their speed around 1200 km/h.

The player may also boost by driving over yellow arrows on the track, however, the effect is much weaker. Also, if the player holds the accelerator around one second before the race starts, they will start near to their max speed. While this is referred to "Boost Fire" (see below) by the narrator, it has little to do with conventional boosting, and results more similar to the Rocket Start from the Mario Kart series. However, pushing the accelerator for too long will result in the announcer saying "Fire", while the thrusters burn in orange flames. This will also give a fast start, but the vehicle will lose the ability to accelerate for a while, leaving it in low speeds for the start of the race unless it crosses over a Dash Plate.

The Blue Falcon performing a Boost Fire in F-Zero Climax. Note the round icons in the lower-right section of the screen. They seem to resemble Poké Balls

The boosting mechanic seen in GP Legend returns for F-Zero Climax, with little to no change besides reworked graphics, adding a "aura" like in the F-Zero anime. However, a new technique first seen in the TV series is introduced into the game, known as "Boost Fire".

To perform a Boost Fire, the player needs to perform the boosting input again while a boost is active. This will change the "aura" color from cyan to orange, indicating that the technique was performed correctly. The Boost Fire increases the speed even further, around an additional 300 km/h. This will be announced by the narrator shouting "Boost Fire!", however, it must be noted that Boost Fire may be performed only once per lap (after the second). It also exists the capacity of performing a spinning Boost Fire like those shown in the anime. To do so, the player simply needs to Boost while a Spin Attack is in process. The narrator will announce "Boost Fire!" with joy, or, if used by Zoda, Black Shadow, Blood Falcon or another villain, the narrator will say "Black Fire" in an evil tone.

As with GP Legend, the player may also "Boost Fire" at the start of the race, following the same instructions. One may also employ a regular boost by driving over a yellow arrow, but just like in the past game, the effect is much weaker. It also appears that Boosting conserves the vehicle max speed reached while boosting. For example, if one boosts, and then crosses over a Dash Plate, then Boost Fires, and then crosses over another Dash Plate, the effect for all four methods of increasing speed will maintain active and accumulated as long as a Boost is in use, or consecutive boosting is done, or it crashes. After that, the vehicle will slowly revert to it's normal top speed. 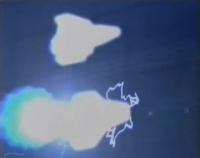 The Astro Robin Boosting in F-Zero: GP Legend, with the Blue Falcon preparing a Boost on it's side

Boosting is also present in the GP Legend anime, shown virtually in every race. Here, the vehicles glitter on a intense blue light and burst speeding ahead of other racers. The anime is notorious by introducing the "Boost Fire" later shown in F-Zero Climax, where a machine is deprived of their safety mode, spinning wildly in the process, and then, having a powerful boost of speed even larger of the regular boost. It is later revealed that the Boost Fire depends on the Reactor Might, and it's also shown that a machine may perform only one Boost Fire per Reactor Might installed within the vehicle's engine.

Another, unrelated form of boosting, exclusive to the anime, is the "Sandwich Burst", named like that by Super Arrow after Miss Killer tought him how to execute the boost. This special form of boosting involves a vehicle boosting ahead by passing between other two vehicles that are also boosting.