Outer Space was once a space colony, but it was hit by a large group of meteorites. It was of no more use but the F-Zero execution project requested to rebuild what was left into an F-Zero race track. Though successful, the track is full of dangerous hazards. Every F-Zero pilot fears this place.

Appearances in the games 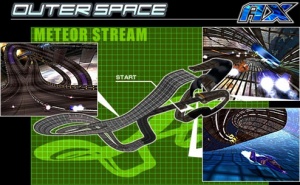 Outer Space only appears in F-Zero GX and F-Zero AX. It appears specifically for AX, but the AX cup is unlockable in GX, so Outer Space is technically in both games. Meteor Stream is infamous for icy roads.