Tenth Zone East, also known as East Ten Side (イースト テン サイド, Isuto Ten Saido[?]) in Japan, is a city in F-Zero: Maximum Velocity. It was the first city chosen as the production center of small ships and passenger cruisers. The pollution problems are due to the cosmic-scale industrial development of the zone, located on the 10th block of the enormous complex, hence the name of the area. The polluted sky can hide the sun even for an entire year, so prepare your gas mask to race in this smoggy world.[1] 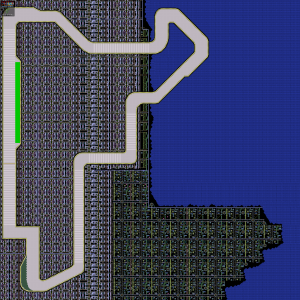 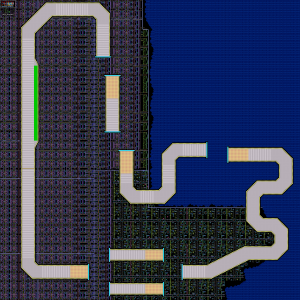 Plummet Circuit has lots of jumps.[2] This track has off-center gap jumps, so approaching a jump plate at an angle is crucial. There is even a gapped fork towards the last stretch of the track.

This is the only track in the game that is locked while also being a demo track.

Tenth Zone East is the only F-Zero location whose name has more than two words.