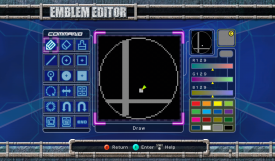 Designing a simple emblem in the Emblem Editor.

The Emblem Editor is a feature used in the Garage mode of F-Zero GX. Essentially a heavily scaled-down drawing program, it allows players to design various emblems that can be affixed to custom vehicles.

Individual emblems are saved onto the memory card and require 3 blocks each to save. Emblems can be saved to and loaded from memory cards in either Slot A or Slot B of the console.

Players can draw on a single square canvas with the following commands available for their brush:

The controls for the Emblem Editor are as follows: