From F-Zero Wiki, the F-Zero encyclopedia
(Redirected from Staff Ghost)
Jump to navigationJump to search 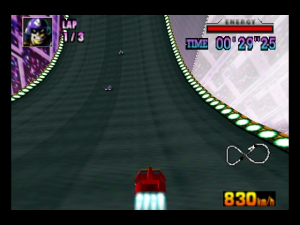 A ghost is a recording of a player's performance on a specific track that races on the track alongside them. Ghosts are so-called because players cannot directly interact with them as they race; rather, the player and the ghost will simply pass through one another. They debuted in F-Zero X and have since reappeared in several successive games in the series.

Ghosts were introduced in F-Zero X as part of the game's Time Attack mode. In the mode, players could save a ghost of themselves playing for any course that they had completed; furthermore, they could then choose to race against this ghost if they attempted the course again.

Players can only save one ghost on an F-Zero X cartridge; if the player attempts to save any more ghosts, the older ghost will be deleted.

In addition, staff ghosts are unlockable by completing the course within ten seconds of that staff member's record.

Ghosts were only featured in F-Zero: Maximum Velocity's new Championship mode. When first unlocked, the player has access to a replay featuring Hot Violet completing the new course; in addition, when the player first plays this course, they can race against a ghost of Hot Violet. If the player can beat the pre-existing ghost of Hot Violet, they can overwrite this data with their own ghost; following this, the player can then race against their own ghost, as well as overwrite any ghosts that can beat the previous ghost. 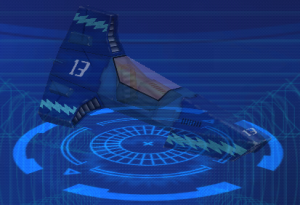 A Staff Ghost in the F-Zero Shop; the vehicle featured changes depending on what the Staff Ghost uses.

F-Zero GX featured ghosts as part of its Time Attack mode, like F-Zero X. Functionality was effectively the same between both games, though players could save more than one ghost onto a memory card, with individual ghosts taking up 3 blocks apiece; that said, players can only save one ghost per track.

Outside of the above, a ghost is used in the final chapter of F-Zero GX's story mode, as to represent one of the three Creators that race against Captain Falcon.

Ghosts returned for F-Zero GP Legend, again being part of the Time Attack mode. Whenever a player clears a track in Time Attack mode, they can save a ghost of their most recent performance, as well as optionally race against them in Time Attack. Like in F-Zero X, the player can only save one ghost at a time to a cartridge.

In Japan, several cards released for the e-Reader add-on featured staff ghosts that could be raced against. After scanning in four cards with two barcodes each, the player could view a replay of these ghosts, then race against them. The ghost can then be saved if so desired, though doing so will overwrite a ghost if the player already has one on the cartridge.

Ghosts returned for F-Zero Climax, again as part of the Time Attack mode. Unlike the previous Game Boy Advance titles, players can now save one ghost per track. Ghosts can also be saved for any custom tracks the player has made.