Big Blue (ビッグブルー, Big Blue[?]) is a fictional planet where 99% of the surface is covered by water.[1] Its circuits are built over and/or through its vast ocean. While appearing less frequently in the games than Mute City, it is still arguably the second most well-known F-Zero location, due it its inclusion in the Super Smash Bros games, and its easily distinguishable theme music. In F-Zero X, the Big Blue courses are held on planet Odyapes, which is also a watery planet.

In most F-Zero games, it has the appearance of a wide, open sea, with numerous rocks sticking out of the water, and very few buildings. In F-Zero GX, however, Big Blue underwent a significant change in appearance, and looked much more industrial than in the other games, with buildings, hotels, underwater tunnels, etc. found all over the circuits. The planet was strictly protected by the nature conservation group over a long time, but it was rumored that a new energy source lay deep down in the seabed; investigation started right away, although no discoveries have yet been found.[2]

Big Blue first appears as the second course of the original F-Zero.

In F-Zero X, most of Cylinder's length runs on a large, winding tube, whose entire surface can be raced, including upside down - however, steering too sharply may send a racer off the track. Quick Turn is very hard with straightaways without guard rails and sharp high-speed corners. Big Blue 3 (exclusive to the Expansion Kit) is designed to look like Japan.

In F-Zero GX, Drift Highway is the first race in the Sapphire cup. It is a relatively easy course. Ordeal is the hardest non-unlockable course in the game. 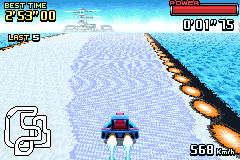 Appearance in other games

In Mario Kart 8, there is DLC for a track inspired by Big Blue, complete with references to F-Zero X mainly.