Pico (ピコ, Piko[?]) is the pilot of the Wild Goose, and a recurring playable character in the F-Zero series.

Having appeared in every F-Zero game with the exception of F-Zero: Maximum Velocity, Pico is an F-Zero Grand Prix veteran; despite his longtime presence in the races, however, fans look on him with contempt and fear. Hailing from Death Wind, Pico is a former soldier who served in a special unit of the Poripoto Army, where he waged deadly battles and completed dangerous missions. Though he has since retired from service, he still finds work as an assassin, and is seen from his ending movie in GX to remain highly proficient with a variety of firearms. In his spare time, Pico also collects knives, whose sharpness he enthusiastically highlights.

On the race track, Pico displays a cold bloodthirst – in fact, some say it was his reckless driving that caused the notorious accident three years before X's Grand Prix. The Wild Goose's durability enables Pico to focus more on destroying opposing machines than overtaking them. Despite his keenness to brutally assault, however, he is cool and calm off the circuit (though his F-Zero TV interview portrays him as wild and manic). He is also said to be cunning, with a sharp survivor's instinct that assists him in races. It's insinuated that Pico could be lying about his billed age, with both X and GX casting doubt on his self-claimed age of 123-124 (which is much higher than his billed age of 34 in the original F-Zero). He also displays hints of a large ego, claiming in his F-Zero TV interview a desire to establish an especially dangerous "Pico Cup".[1] 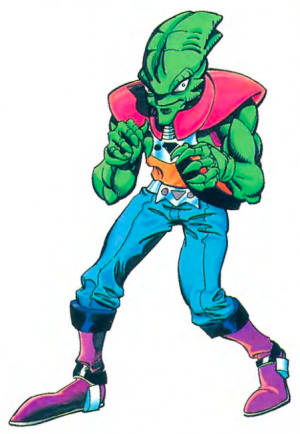 Artwork of Pico from the F-Zero manual

Pico is a bulky, green-skinned alien of an unknown race. His appearance is characterized by thick, veiny limbs with grooved plates on his outer thighs and shoulders, as well as a distinct head shape with an elongated top, beady yellow eyes with no visible pupils, and a large, sharp-toothed jaw resembling a snapping turtle.

From X onwards he wears an orange chestplate with a yellow lightning bolt design printed on its front, under which he seems to wear a blue cloth T-shirt. This chestplate has a pair of metal gray pipes leading into what appears to be an orange shell on his back. He wears blue gloves with flared necks and bright red boots with metallic kick pads.

In the original F-Zero's instruction manual, Pico's body appears very similar, though his eyes are more human-like with white sclerae and green irises. He also does not wear gloves, revealing clawed fingers. He wears what appears to be an orange shirt with thick, light red shoulder-pads supported by a metallic midsection, blue jeans with a silver belt, and light mauve boots.

Pico and the Wild Goose have appeared in every game in the F-Zero series except for Maximum Velocity.

Pico made his debut in this game alongside Captain Falcon, Dr. Stewart, and Samurai Goroh in the original F-Zero, though his only physical appearances lay in the instruction manual, where he is described in the enclosed comic's last three pages as a "wild-running killer", and is seen to yearn for blood on the circuit.

He goes on to reappear in most future installments, though he makes no meaningful appearances in any story mode in the series.