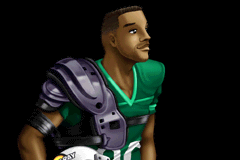 Alexander O'Neill[2] is an African-American former pro-football player and the pilot of The Stingray, appearing only in F-Zero: Maximum Velocity. Alexander has a buzz cut and thin beard, and wears a green jersey with a white "30" in the front, along with a mechanical brace on his shoulder. His boots also appear to have mechanical components to them, and his helmet has the logo of his machine. Despite no longer playing football, he continues to wear the jersey.

Alexander O'Neill, with The Stingray, is unlocked by clearing the Pawn, Knight, and Bishop Series cups on Expert class[2].