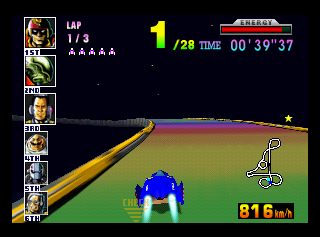 Rainbow Road (Rainbow Road: Psychedelic Experience in full) is the first Joker Cup track in F-Zero X. It is a port of the track Rainbow Road from Mario Kart 64, though altered to fit in line with the F-Zero theme. Rails have been removed, traps have been put in place of Chomps, and pits have been added to the final stretch. The track is not completely rainbow-colored, with many dark gray areas. Rainbow tracks also show up in some X Cup tracks. Also note that the well-known shortcut from Mario Kart 64 results in death even if aimed properly due to the control point system used to create the F-Zero X tracks. If one has the F-Zero X Expansion Kit, a remix of the Mario Kart 64 Rainbow Road music will play instead of Sector's music.

Every game in the Mario Kart series has a different version of the track, with this version being based on the Mario Kart 64 variant. Rainbow Road serves as the final track of the Special Cup and is among the hardest of tracks.