Championship is a special mode in F-Zero: Maximum Velocity, F-Zero: GP Legend, and F-Zero Climax. For each game, it is a track designed to test the player's skills with various hazards and track features. 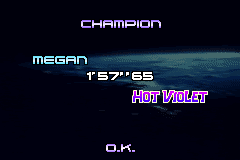 Championship made its debut in Maximum Velocity, though it must be unlocked by having the player register their name in the rankings of all races of every cup.

The track featured in Championship is the Synobazz Championship Circuit, which cannot be accessed outside of Championship mode. A replay and ghost are immediately available for the course, featuring Hot Violet completing the course in 1'57"65. If the player can manage to beat this time, then their own replay will be saved over this pre-existing replay. 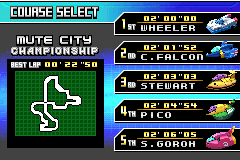 Mute City Championship is the track. The track is accessible in Time Attack. 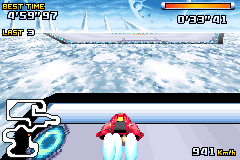 Red Bull on the track 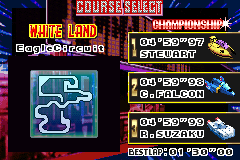 White Land Eagle Circuit is the track. The track is accessible in Time Attack.