Mr. Zero, as he appears in F-Zero X's countdowns.

Mr. Zero (ミスター ゼロ, {{{3}}}[?]) is the official announcer of all F-Zero events, as well as the apparent host of F-Zero TV. A cyborg in nature, Mr. Zero debuted in the Super Nintendo's F-Zero comic, acting as the announcer for the races, though he did not appear in the game proper. He made his official game debut in F-Zero X, where he briefly appears giving the countdown before races, as well as informing the player when they have boost power, when they have finished a race, and similar events. He reprises this role in both GX and AX, and he also acts as the host of F-Zero TV, where, if the player has finished first in the Grand Prix, he will interview the player's character, often asking questions related to their motivations, why they race, and similar questions. When interviewing some drivers like Black Shadow or Deathborn, he can be seen quivering in fear.

In the original F-Zero and F-Zero: Maximum Velocity, Mr. Zero's voice is indicated by three electronic beeps. In F-Zero X, Mr. Zero is voiced by Jim Wornell[1], and by Jack Merluzzi in his appearance in F-Zero GX and AX. 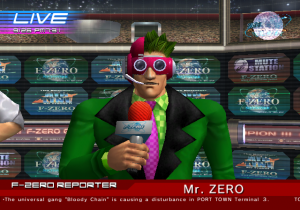