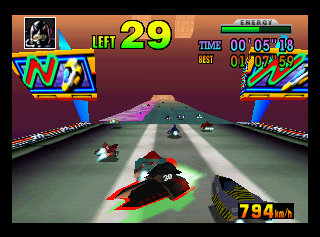 Death Race is a mode in F-Zero X that tasks the player with retiring twenty-nine racers on a specially designed course. The player's score is measured via how long it takes for them to retire all twenty-nine other racers.

The mode takes place on a looping course with flat sections on the top and bottom. The racers start on the bottom, and climb to the top. The flat section at the top has a Pit Zone and no guardrails, while the bottom has a single Jump Pad. Turning is not required to complete a lap on this course.

Unlike most other gameplay modes in F-Zero X, there is no set number of laps; the race will continue until either all 29 racers are retired, or the player's own vehicle is retired.

The object of Death Race is to retire all of the other racers using side and spin attacks. While the lack of guardrails on the top of the track can allow for players to retire opponents, a mistimed Side Attack can also cause the player to topple off the course. Furthermore, the Jump Pad at the bottom of the course can retire players who do not properly land back on the track.

Owing to the presence of numerous racers on a thin track, alongside wanting to preserve their own survival, Death Race is best-suited for vehicles with a high body stat, such as the Black Bull or the Fire Stingray.