This cosmopolitan terminal uses hi-tech elevators which ties the ground with space. It is considered as the new mode of transportation where it substitutes the tracked elevator. Presently, the construction has reached a height of 86,000km, but because the budget is exceeded substantially, construction has a rough going. In such a circumstance, the F-ZERO Execution Project constructs the circuit coercively inside the elevator.

Appearance in the games[edit] 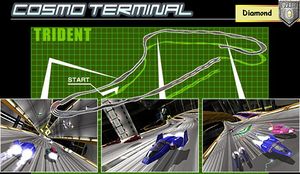 Cosmo Terminal only appears in F-Zero GX. Trident is a dangerous course where you often have the choice between three paths, each lacking guard rails.