This article is about the SNES game. For the series as a whole, see F-Zero (series). For the video game music album, see F-Zero (album).

F-Zero (F-ZERO, Efu Zero[?]) is a futuristic racing video game developed and published by Nintendo for the Super Nintendo Entertainment System. The game was first released in Japan on November 21, 1990 and later in North America on August 13, 1991 and in Europe on June 4, 1992. The title was downloadable over the Nintendo Power peripheral in Japan.[1] It was also released onto the Nintendo Super System. The special edition of the game was released on the Super Famicom's Satellaview attachment.[2] As the first game in the F-Zero series, it was released in Japan as one of the two debut titles for the Super Famicom, the Japanese name for the Super Nintendo Entertainment System.[3] However, in the United States, this launch title was accompanied by more games.[4] In late 2006, F-Zero became available over the Wii's Virtual Console[5] and the Wii U's Virtual Console on February 20th of 2013 worldwide. On September 5, 2019, F-Zero became available for the Nintendo Switch Online application as one of the launch titles for the Super Nintendo Entertainment System segment[6].

F-Zero has been praised for its original scenarios and style of gameplay. As a result, the title has influenced numerous other racing games.[7][8][9]

F-Zero features an elimination style race in which the player is given a certain place to be in each lap (1st place, 2nd place, etc.). The player will be knocked out if the player is not in that place or higher at the end of a lap. 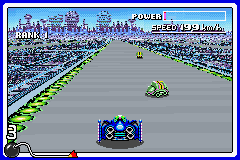