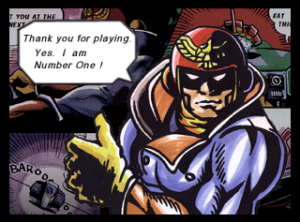 Captain Falcon's moveset does not feature any resemblance to the F-Zero games, but they somewhat look like the fighting style Captain Falcon uses in the comics of F-Zero manuals. A lot of his moves are also related to either falcons and/or fire, as his name suggests. Captain Falcon in this game is very fast (Very fast aerial speed, fastest running speed, and fast attacks for how powerful they are.), with powerful moves and a huge amount of combos, being able to effectively combo nearly every single character in the game.

Dash Attack - Does a shoulder ram that deals around 14% damage.