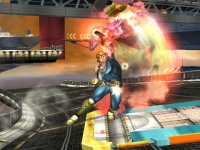 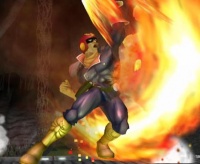 Raptor Boost is the name of Captain Falcon's side special move used in the Super Smash Bros. series, starting with Super Smash Bros. Melee. The move involves Captain Falcon rushing forward, and preparing for a fiery uppercut. If the move connects with an opponent while he charges forward, the foe will be launched upwards, often leading into various combos, such as his Forward Aerial or Falcon Dive if timed correctly.

This move was the pinnacle of his combos in Super Smash Bros. Melee. Almost all of his throws are followed by this attack. Though the attack is fairly weak in its own right, doing around 6% damage (which is considered low in the Smash Bros. series). When used in the air, it launches foes down.

The move is significantly more powerful in Super Smash Bros. for Wii U, being able to KO around the 100% range.