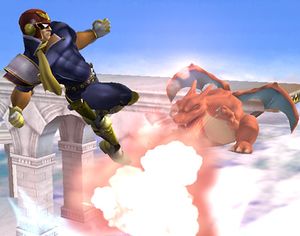 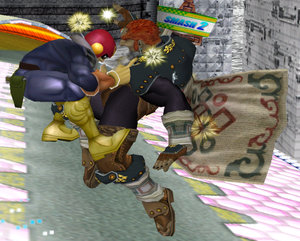 Captain Falcon grabbing onto the character in Melee.

Falcon Dive is a special move that Captain Falcon can use in all three games in the Super Smash Bros. series. It is executed by tilting the control stick up, and pushing the special move button. Captain Falcon will then proceed to punch upwards, acting as a third jump. As an added bonus, if he hits an opponent on the way up, he will grab them and cause an explosion, sending the two separate ways, and sending the other player flying far. This can even act as fourth jump, if the user succeeds in hitting someone. Captain Falcon will be able to use this attack over and over again in one jump, but only if he manages to hit someone each time.

When the hit connects, Captain Falcon will shout the phrase 'Yes!', sometimes spelled YESH!, which, like many of Captain Falcon's traits, has become an internet meme in its own right.