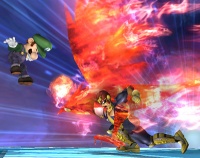 The Falcon Punch in use in Super Smash Bros. Brawl

The move consists of Captain Falcon throwing a powerful punch. It is one of the most powerful and slowest moves in the series, with a high knockback as well. The Falcon Punch is also Captain Falcon's strongest move in the series. This move is also used often in the Home-Run Contest, and can sometimes be even more powerful than Home-Run Bat. The move is very predictable, considering Captain Falcon yells "Falcon Punch!" every time he uses the move, which often gets interrupted by other players or computers hitting him.

The move is one of Captain Falcon's primary knockout moves in the Super Smash Bros. series. It is best used when timed to match an opponent's recovery, demolishing them as they recover from severe hits.

Captain Falcon charges a mighty punch, then releases it with a fiery falcon surrounding his fist. In this attack, he will shout, with much enthusiasm, "FALCON... PUNCH!", and his fist is enblazed with fire in the shape of a falcon. It is his most powerful move, out-powering all of his other attacks (excluding his Final Smash, Blue Falcon). It is also his highest priority move. It KOs at low percents, usually around 30% near the edge of a stage, though in most cases, KOs characters with above 70% damage.

Its use is not questioned very much. It can be used whenever he predicts a foe's fall, at the end of a combo (A.K.A. the "Sacred Combo"), or a well timed blow after his Down Aerial. It is also useful for defeating bosses because of its power. 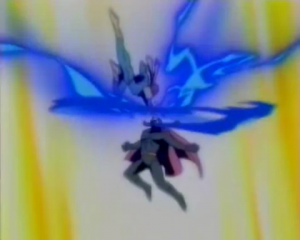 The Falcon Punch in the anime

In the last episode The Legend of Falcon, of the F-Zero: GP Legend anime, Captain Falcon uses the Falcon Punch to destroy Black Shadow. The Falcon Punch's appearance in the anime is vastly different to its appearance in the Super Smash Bros. series; instead of falcon-shaped flames, massive blue thunderbolts emanate from Captain Falcon's fists. The anime Falcon Punch is less powerful than in Super Smash Bros.; the attack seems to destroy Black Shadow and the Dark Reactor, but the resulting explosion came from the dark reactor being destroyed as Rick wheeler used a spin attack on it. Captain Falcon's use of the Falcon Punch in the anime is the only time it is used in official F-Zero series media.