Finale: Enter the Creators is the ninth and last chapter of the story mode in F-Zero GX. It is unlocked by spending 60 tickets to purchase it in the F-Zero Shop after completing Secrets of the Champion Belt. In this chapter, Captain Falcon's objective is to defeat The Creators in a three-lap race, and presumably save the world. 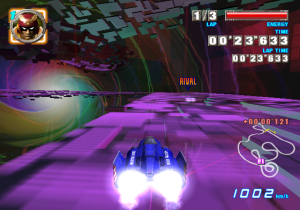 After beating Deathborn, Captain Falcon relaxes at his secret base, where he is then confronted by The Creators. The creators vaguely explain they were behind all the events unfolding in Captain Falcon's story by saying they created the entire world.

Difficulty Changes: In the game's files, there are three ghost replays, each with an increasingly skillful race around the track. There is no AI.