The Super Nintendo Entertainment System (commonly abbreviated to SNES or Super Nintendo, and known as the Super Famicom in Japan) is Nintendo's second home console, the successor to the Nintendo Entertainment System (NES). The console was first released on November 21, 1990 in Japan, with later releases coming to North America, Europe, and Australia. The F-Zero series made its debut on the console, spawning a successful franchise for Nintendo.

The SNES was the successor to the NES, a system which had dominated the home console market since the mid-eighties. That dominance was challenged, however, by the NEC TurboGrafx-16 (released in 1987) and the Sega Mega Drive (released in 1988), both of which featured 16-bit architectures that outperformed the NES in graphics and audio. Though initially reluctant to replace the NES, Nintendo eventually decided to create a system that could compete with its more powerful rivals.The console was designed by Masayuki Uemura, the designer of the original NES, and shipped in Japan as the Super Famicom on November 21, 1990.

Despite its late start against the TurboGrafx-16 and the Mega Drive, the SNES was the best-selling console of its generation, owing to its superior colour output, tiling, scaling, and rotational effects compared to its competitors. The SNES also had several critically acclaimed titles released through its lifetime, furthering its popularity; throughout its active lifetime, which ended in 1999 in North America but continued to 2003 in Japan[1][2], the SNES sold 49.10 million units.[3] 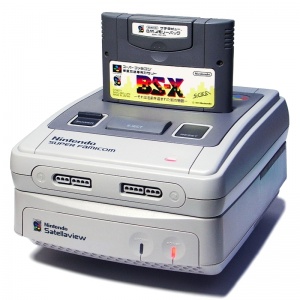 The Satellaview was a hardware add-on for the Super Famicom that was only released in Japan. It featured a unique method of playing games, where games were downloaded onto a flash cartridge from satellite broadcasts. Despite its high cost, it reportedly sold over 2 million units in its lifetime, and broadcasts for the add-on continued into 2001.

Released in Japan as one of two launch titles for the SNES on November 21, 1990, F-Zero, the first game in the F-Zero series, is a futuristic racing game developed by Nintendo EAD and published by Nintendo. Set in the year 2560, the game focuses on the "F-Zero" Grand Prix races, a new form of entertainment funded by multi-billionaires and based on the Formula-1 races, that features racing between vehicles that hover one foot above the track. The series introduced four playable characters: Captain Falcon, Dr. Stewart, Pico, and Samurai Goroh.[4]

F-Zero is considered to be the game that set the standard for future racing games. With its fast-paced, challenging gameplay, multitude of tracks, and use of the Mode 7 graphical mode to create a 3-dimensional effect (a technique that was innovative at the time), F-Zero helped give new life to the racing game genre and inspire numerous new racing titles.[5][6]

Released several years after the original F-Zero, BS F-Zero Grand Prix was a Japanese-only title released for the SNES Satellaview expansion.[6] It introduced new tracks along with retaining the 15 from the original, and added four new vehicles. 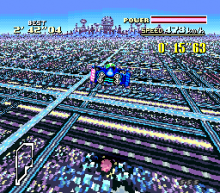 Example of the Mode 7 graphics used on all of F-Zero's maps.

Mode 7 is a graphics mode developed for the SNES console by Nintendo that allows the background layer to be scaled in size and rotated on a scanline-by-scanline basis to create the illusion of moving in a somewhat 3D environment via scrolling. In actuality it is an alteration of perspective rather than 3D. The background layer remains 2D, but the effect transforms the textured map into a horizontal plane that trades height for depth while still remaining 2D, thus creating the impressive illusion of 3D graphics. F-Zero was the first game to use this effect and it would later be featured in numerous other games released for the console.