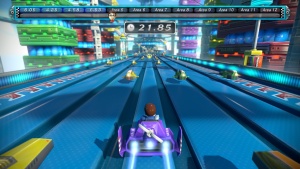 The player's Mii controls a clockwork version of the Blue Falcon through an F-Zero course. The goal of the game is to reach the end of the course, hitting checkpoints along the way to ensure time does not run out. There are other machines racing, though these do not move particularly quickly, and can damage the player if they run into them. It would not matter if one of these machines crossed the finish line before the Blue Falcon, as the only objective of the game is to reach the end of the course. The player can guide the Blue Falcon over boost pads and ramps, and the courses have Mario-style invincibility stars scattered throughout, which temporarily allow the player to safely drive through any obstacle. As the player progresses, various other obstacles will appear on the track, such as twisters that slow down the Blue Falcon, spikes, bombs that cause an instant Game Over if hit, pillars, and long vehicles.

The player must hold the GamePad controller vertically, and turn the GamePad to steer the Blue Falcon through the course. The GamePad's screen displays an overhead view of the track.