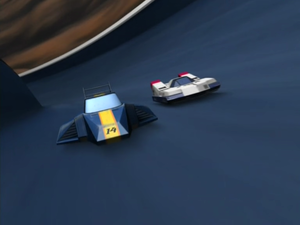 The episode begins with Rick Wheeler racing against Jack Levin. Jody Summer directs Rick from headquarters to push his machine further to gain the lead. Dr. Clash comments that the Dragon Bird has more power and can overtake Jack on a straightaway. Jody pushes for Rick to speed up, and when he does, he loses control on a turn and runs into a rail, spinning out and stopping. Jack passes and turns around to help, along with Jody, Dr. Clash, and Mr. EAD. Jody scolds Rick, saying he's not ready to join the Galaxy Police, which Jack looks surprised at.

Back at headquarters, Dr. Clash works to fix the Dragon Bird, to the annoyance of Jack who is trying to sleep in his machine nearby. Dr. Clash comments about Jody's fixation on Rick, to which Jack responds he does not understand why Jody is so focused on Rick. Dr. Clash explains he is similar to how Jack was when he first started, saying she saw something in him and gave him a chance, and continues by saying Jody still likes Jack, but warns that Jack needs to be more polite to Rick or else Jody will boot him from the group. Jack responds by kicking Dr. Clash. Mr. EAD comes running down the hall, exclaiming that John Tanaka has summoned Jody to his office, Dr. Clash and Jack speculating it could be about Rick being injured in the crash.

In the office, John says the Chief is asking who they took out of cold sleep and why, suggesting they put Rick back into cold sleep before word gets out about the crash. Dr. Stewart denies that course of action and Jody says he just needs more time to learn the machine and they need someone like Rick on the force. John warns that the Chief will not like what he hears and will fire someone, thinking it will be him since he is in charge. Jody slams his desk and says he can fire her rather than anyone else. Her and Dr. Stewart head down the hall, meeting Jack and Mr. EAD as she is talking about being fired. They ask what she means, but she ignores them and says to bring Rick to the conference room. 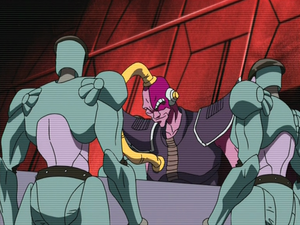 Once there, Jody explains that criminals found guilty of capital crimes are put in a cold sleep, saying they used to ship them to the planet Alcatrand, which is supposed to be escape-proof. Five years ago, Black Shadow raided the prison with several of his minions, awaking and modifying Zoda within the prison. Jody explains Zoda is now one of Black Shadow's top soldiers in an organization called Dark Million, whose goal is to take over the universe. Rick asks how that is possible, to which Jody explains that they try to win as many F-ZERO races as possible to gather the prize money. Jody says their own mission is to stop that from happening, though talks harshly to Rick saying he needs to outrun Zoda this time and not end up in a worse state than before. Jack taunts Rick saying training is only part of it, but Rick lacks what he needs to be a good pilot. Mr. EAD says if Jody believes in Rick, then they should, too. Jack says if Rick cannot even take turns properly, then he should go back to cold sleep and leave the rest to the professionals. Rick gets up and walks away, making Jack think he is quitting.

Rick heads to a race track to test his speed when an image of a laughing Zoda comes to him. He starts to think Jack is right, that he will not be able to overtake Zoda. Regardless, he continues to train all night, sleeping in his machine until morning comes. Rick heads to a cafe and meets Bert, who offers Rick a coffee, and Rick comments how hard it is to live in Mute City. Bert asks how long ago Rick lived here, to which he replies a hundred-fifty years ago. Before Bert can ask what he means, Rick overhears some girls talking about Jack, and he interrupts, which makes the girls wonder who he is. The girls invite him to tag along to Planet Ninte to see an F-ZERO race. Bert says he will also join and watch, saying he named his cafe the Falcon House after Captain Falcon. A girl says Bert wanted to be an F-ZERO racer, but he got in a bad wreck in a turn. His explanation on how he handled the turn is similar to how Rick has been handling his, and mentions more modern machines automatically control extreme steering and counter steering is unnecessary. Bert says he never went back after that, but brushes it off saying he would not be able to keep up with the new pilots anyway. He also says there are some bad guys on the circuits now who go to extreme lengths to win the prize money. Everyone hears machines go by, and the orange-haired girl wishes they had someone who could get the bad guys out for good.

Jody explains to her group that the next race is on Planet Ninte and warns them about the giant loop in the middle of the track. She also warns that Black Shadow's best pilots are racing and they will not play fair, but her group cannot allow them to win. Rick runs in and says he will be racing as well, which Jody denies due to his lack of skill. Dr. Clash and Mr. EAD also supports Jody's decision, but Rick says he realizes what he did wrong on the turns. Jack says Rick will just get in the way, but Rick ignores him and begs Jody to let him race, which Jody again denies. Dr. Stewart steps in and sides with Jody, saying what she says goes for everyone. Rick heads to his spot near the Brooklyn Bridge and watches a ship sail by, thinking back to his time with his girlfriend, Misaki Haruka, on a cruise ship. 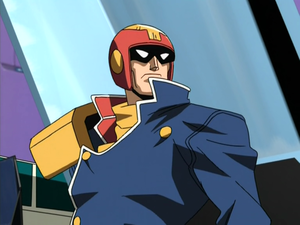 Later, Rick travels down a street to see the bus he was invited to heading the opposite direction, being chased by other vehicles. He sees a large spire, which leads the vehicles up to the interplanetary highway Warp Gate. The orange-haired girl starts to get excited about seeing the F-ZERO race, thinking about the experiences she will feel. The Galaxy Police gets alerted about a street gang attacking the bus that is leaving Mute City, but Jody turns it down saying the local cops can handle it. Jack offers to go take a look, but Jody and Dr. Stewart tell him to stay, saying their priority is winning the race. The street gang goes to attack the bus, followed by the police. One of the gang members launches a rocket at the police, slowing them to a stop. Rick turns onto the road and goes to chase down the gang while the gang fires rockets at the bus, which maneuvers quickly to avoid them. The gang member launches another rocket, which damages one of the bus's engines. Just before another rocket is launched, the group gets alerted about Rick, who catches up to them quickly. The bus comes to a stop and Rick pulls a sharp turn to avoid running into it. Rick gets cornered by the street gang, so he steps out of his cockpit with his gun and tells the gang members to turn themselves in, with the orange-haired girl recognizing him from the Falcon House. The gang members surround Rick and the bus, and are about to fire another rocket until Captain Falcon races in and throws them off. Captain Falcon steps out of his cockpit, the gang members and the girls on the bus recognizing him. Captain Falcon's presence causes the gang to rethink their activity and they all leave, Captain Falcon returning to his cockpit and saying he will see Rick at the race. Rick returns to his cockpit as well and heads to the warp gate.

The F-ZERO racers line up at the starting gate, their statistics being displayed for the viewer. Jack Levin's Astro Robin, Jody Summer's White Cat, Dr. Clash's Crazy Bear, Mr. EAD's Great Star, and Dr. Stewart's Golden Fox are all displayed. As the camera pans over the waiting racers, Rick pulls in to take the empty spot just before the light turns green. Rick starts slow, but soon passes Dr. Clash and Mr. EAD to their surprise, and catches up to Jody, making her question why he is here. As Rick approaches the loop, he remembers the advice about countersteering Bert gave him and speeds up, taking the lead. Jack fights for the lead against Rick, and Captain Falcon approaches from behind. Rick and Captain Falcon hit a Dash Zone, overtaking Jack as he steers off. The three of them jump off a ramp, Jack swerving to avoid landing on the others and lands upside-down, losing the race. Rick, Jody, and the rest of the Galaxy Police come to help Jack, Jody scolding Rick for disobeying her order. Dr. Stewart claims Jack would've won, but Jack says Rick would've won, revealing he planted a device that drains power from the steering on the Dragon Bird earlier, which is why Rick was having trouble steering around corners. Rick punches Jack in response and returns to his vehicle while Jack is carried off to recover. 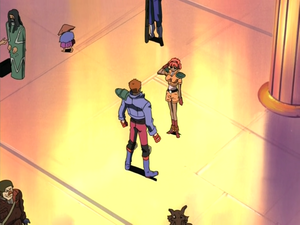 Later in the day, Jody goes to visit Jack in the hospital with a cast on his foot. Jody accuses Rick of crashing his machine to let Rick win, to which he replies he did not want Captain Falcon to win. Jody gives Jack back the device he planted, revealing it is actually a fuse for a headlight, that Jack lied to keep Rick out of trouble. Jody thanks him for boosting Rick's confidence as she leaves. At headquarters, Rick is approached by the orange-haired girl from before, introducing herself as Lucy Liberty and saying she wishes to join the Galaxy Police.

Differences between the Japanese and English versions[edit]