The Legend Begins[citation needed], known as Legendary Start!! (伝説・スタート!!, Densetsu・Sutāto!![?]) in Japan, is the first episode of the F-Zero: GP Legend anime. 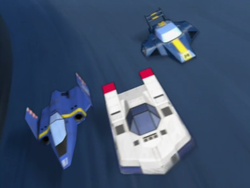 The episode begins with the F-Zero racers starting their engines for a test lap of the 2201 Corkscrew Final. During the lap, Jody Summer explains that they have to stop Zoda and his henchmen from winning the prize money and funding their organization. Rick Wheeler gets cocky and boosts ahead before the racers return to the starting line. The race begins and the racers drive off, Rick obtaining his Boost power, followed shortly by Jack Levin, Captain Falcon, and the rest. An explosion occurs at the end of the tunnel, after which their boosts run out. As Rick taunts Jack, Bio Rex comes up and knocks into Rick, pushing him to the side. Rick responds with an attack of his own, sending the Big Fang into a wall. After commenting that Rick handled worse "bums" a hundred fifty years ago, the scene gives a flashback to Rick's time as a racer during that time period. 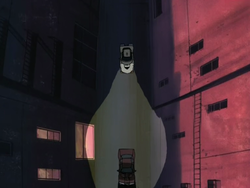 Now in 2051, after winning the Big Apple Grand Prix for the second year in a row, his girlfriend, Misaki Haruka, comes up to give him flowers and poses with him on his vehicle when she is pulled up. Later, Haruka is waiting for Rick under a bridge and decides to call him. Rick is seen waiting in his police car before his phone loses the signal, and he takes out a ring and fantasizes about proposing to Haruka. A police alarm shifts the scene to Zoda escaping a prison in a armored van, which he soon loses control of and topples over. Police members come out to follow, but Zoda pulls out a machine gun and begins firing. Rick gets the details, drops the ring box on the floor while recognizing Zoda, and speeds off to the encounter. Zoda, now in a different getaway vehicle, drives to evade the cops while shooting at them. They swerve out of the way and Rick comes up from behind and chases Zoda through town. Zoda shoots his car's door off, which goes flying through Rick's windshield and puts him in a coma.

In 2201, John Tanaka is trying to convince Jody that awakening Rick from cold sleep after 150 years is not a good idea. They meet up with Dr. Stewart, who tells them Rick's body is severely damaged and may not survive, but Jody is hopeful that Rick will pull through while John worries about his job, saying the operation is illegal. They send Rick to cryo to begin the revitalization process, which succeeds and Dr. Stewart provides Rick with new clothes. Jody introduces herself as the leader of the Elite Mobile Task Force of the Galaxy Police. She asks Rick how he feels, to which he tentatively responds with saying he is okay. In the pile of new clothes, Rick finds the wedding ring he was going to propose with and remembers Haruka, quickly taking his old clothes and leaving. When trying to navigate the facility, he enters a viewing deck overlooking an unfamiliar city. 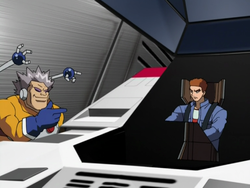 While wondering where he is, Jody comes up explaining that the New York City Rick used to know is now called Mute City. She says there have been many changes since Rick's accident, Dr. Stewart adding that the accident was a hundred fifty years ago and that Rick's been in cold sleep since then. After he remembers the events that led up to his coma and wonders how he slept that long, Jack Levin comes up and taunts Rick, Jody introducing him as another member of the Elite Mobile Task Force. Dr. Stewart recommends that Jack takes Rick on a tour of Mute City, which Jack declines before Rick runs past him in disbelief. Rick finds his way to a garage, encountering Dr. Clash working on a new machine: the Dragon Bird. Rick immediately jumps in and investigates the control panel before demanding the key from Dr. Clash. The key is handed to him and Rick figures out the ignition, starting up the vehicle while Dr. Clash tells him he should not do that. Jack steps into the garage and declares that Rick cannot drive the machine as his license expired a hundred-forty-nine years ago. Rick experiences new speeds with the machine before being dropped into a side street, seeing floating buildings and roads. Rick enters a tunnel and enters the city, seeing floating machines and aliens before thinking he might be still in cold sleep. He enters traffic and the Dragon Bird loses power, forcing Rick to take the side streets instead. While there, he recognizes Brooklyn, and goes to where he planned to meet up with Haruka. He looks around for her and notices her, before finding out the woman is not Haruka. While looking at his ring, Jack comes up and teases Rick about the ring, then is confronted by Rick. Jack claims this is a popular area with pretty girls, just like back in Rick's day, which is how he found Rick. During the taunting conversation, Jack claims girls like him because he is an F-Zero superstar and brings Rick to a popular bar to prove it. Upon entering the bar, a trio of girls approach Jack. Rick wants none of it and starts to leave, but the girls take an interest in him and start asking him questions and inviting him to dance. Rick runs off and Jack follows him, taunting him about not having what it takes to be an F-Zero racer. Rick says he has been winning races since before Jack's great-great-grandmother was born, to which Jack challenges Rick to a one-on-one race for the Dragon Bird. 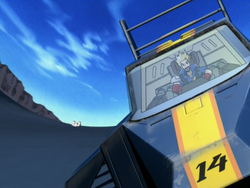 Rick and Jack race through a ravine into the city, reaching a white line and starting the race. Rick, unsure on how to handle the Dragon Bird, has trouble gaining the boost he needs and Jack overtakes him. Determined to win, Rick pulls ahead until Jack drifts on the turn and takes the lead again. Rick activates his Boost power and flies ahead of Jack, but has trouble maintaining the grip on his machine's drifting. He ends up losing control and sliding into a wall, bouncing around and landing upside-down before tumbling back over and coming to a stop. Jack comes up and taunts Rick's driving, to which Rick claims Jack cut him off. Jack tells Rick to fix the Dragon Bird before delivering it to him and leaves, with Rick getting upset and holding an injured arm. Jody is seen watching the race from afar. 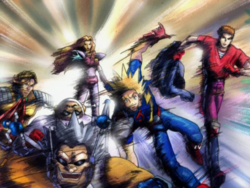 The scene transitions back to the facility's garage, where Rick is fixing the Dragon Bird before an alarm goes off. A newscast is playing on a nearby screen, showing an altered Zoda attacking an area. Rick immediately recognizes him and finds his way to a meeting room where Jody is debriefing her troops, consisting of Jack, Dr. Clash, Dr. Stewart, and Mr. EAD. When Dr. Stewart asks where Rick is, Jack explains he is fixing the Dragon Bird and that he was trying to teach Rick how to handle it. After claiming Rick banged it up and gave it to Jack willingly, Rick comes up in his new clothes and states he is going with them. When he says he is taking the Dragon Bird, Jack says they had a bet, but Rick calls it off. Jody sends everyone out and the scene returns to where it left off before the flashback, saying that is when Rick joined the F-Zero team and his new future begins.

Differences between the Japanese and English versions[edit] 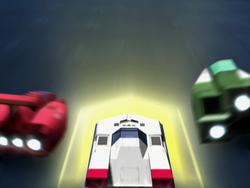 The race between Rick, Octoman, and Bio Rex at the end of the Japanese episode