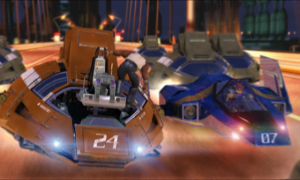 Bloody Chain was an F-Zero racing clan founded and led by Michael Chain. It hit its zenith when Michael was in his mid-thirties, during which its membership exceeded 10,000 in number. However, when Michael hit about 39, many gang members deserted the clan because they didn't believe that Michael was making the cut with his racing skills. Soon, rumors began to spread that the entire organization was going to dissipate within the next year. At about that time, the gang had a run in with Captain Falcon on a highway from the Zero Casino to the Lightning area. The gang members deserted Michael Chain after suffering harsh blows from Falcon.