From F-Zero Wiki, the F-Zero encyclopedia
< Template:FeaturedArticle
Jump to navigationJump to search 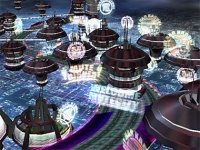 Mute City (ミュートシティ, Mute City?) is a heavily populated fictional city on Earth in the F-Zero series. Its original name was Mutant City from which the current name is abbreviated. In the television anime, F-Zero: GP Legend, Mute City was formerly known as New York. In F-Zero GX, Mute City is known as a "Metropolis in the Heart of the Space Federation" and the information link for the entire universe. It is also regarded as the most advanced and sophisticated city in the universe. This city is the most famous stop on the F-Zero Grand Prix and has courses in almost every F-Zero game to date. The only exception being that of the Game Boy Advance game, F-Zero: Maximum Velocity, where it was replaced by Bianca City. A large deposit of pure titanium was discovered at Bianca City forty years prior to its events. As a result, the village became a boomtown overnight. As it grew, it gradually replaced Mute City as the center of economic, political, and cultural activity in the galaxy.