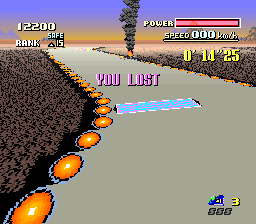 Retire is the state in which a machine can no longer race. This happens when its energy goes lower than zero, it falls off-course, doesn't make the rank requirements each lap in Grand Prix (in F-Zero and F-Zero: Maximum Velocity only), or gives up. In F-Zero, if the pilot reaches 20th place, the game forces the pilot to retire.

If the player has enough spare machines, they can try again, or it's Game Over. In Practice mode, this is not an issue, especially in F-Zero GX, where there is a setting to prevent this.

In F-Zero X and F-Zero GX, the pilot has a few seconds before their machine explodes. This allows them to still cross the finish line on the third lap without retiring.

Spin Attacks and Side Attacks can force other racers to retire, and is essential in Death Race.